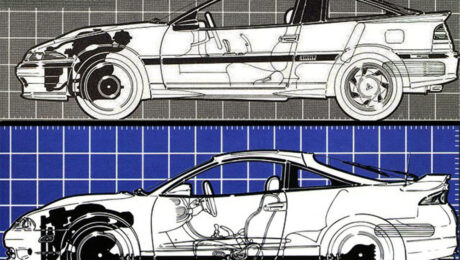 How to put a 1G engine in a 2G car. Complete installation guide.

So here it is finally an easier way for you 2G owners to get away from the dreaded crankwalk.

It seems this was the answer most of you wanted, so we found a solution on how to mate the 1G motor utilizing the 1G cam and crank sensor trigger assembly to the stock 2G computer.

Using this fix will also alleviate the weak timing that has always plagued the 2G’s (4-6 degrees retarded on the 95-96, 97-up is very timing sensitive to airflow based on turbo size, but base idle timing can be adjusted) 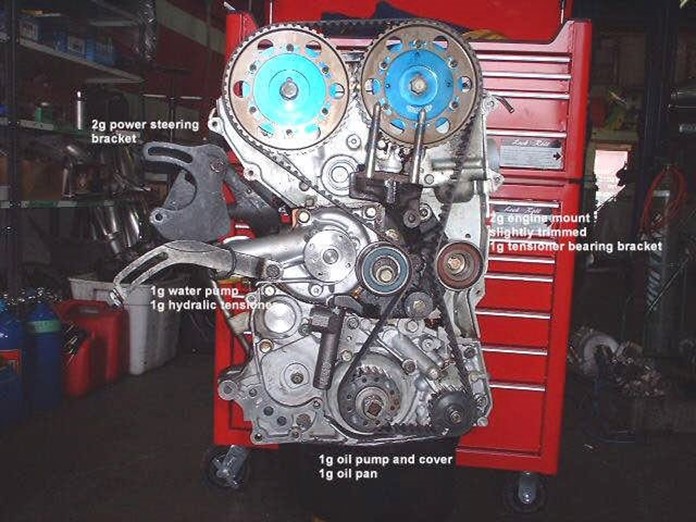 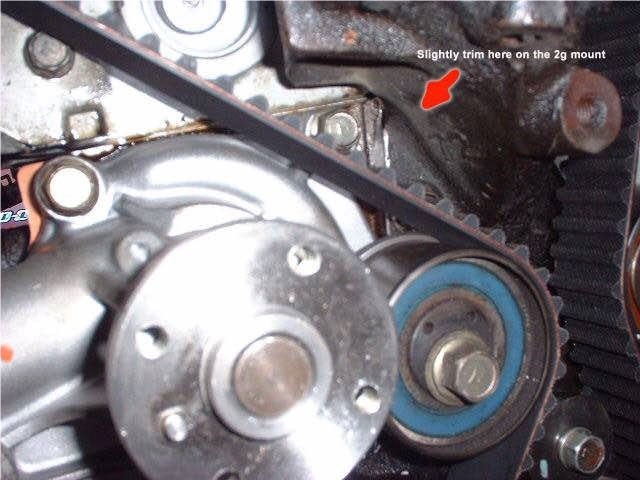 You can see where the 2G mount must be trimmed to clear the 1G water pump, the only cutting involved. 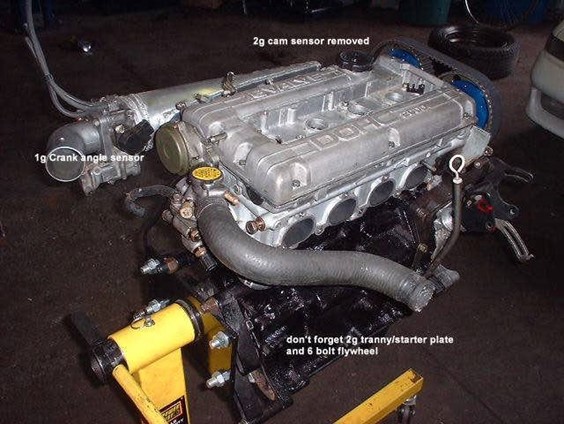 Here is the heart of the whole mod and what makes it all possible, a 1G cam sensor, mounted in the original location. Pictured here is a JDM Galant sensor, we like it because the wires can reach all the way to the engines drivers side, and no need to go hunting for a connector. Plus we have about 20 sitting on the shelf, same as a 1989-90 unit apparently. 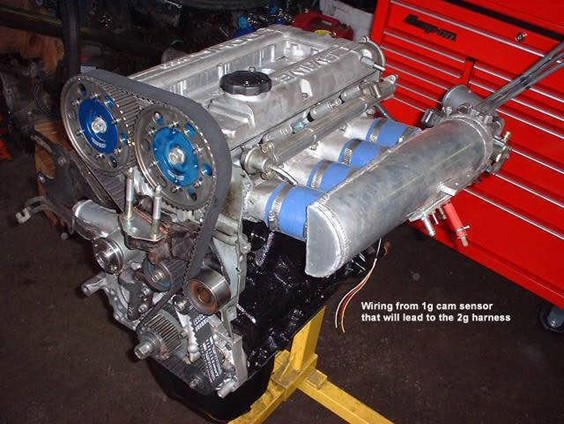 For a complete 1G 6-bolt head/block

Installing a 1G Cam Angle Sensor in a 2G

Anatomy of a Cam Angle Sensor

There are three types of cam angle sensor that are known to work. The early years (89-92) have a metal green/gray cover, use a flat rotating disk with slots, and an optical sensor.  The later year sensor (93-94) has a black plastic cover, uses curved metal plates that rotate through a hall-effect sensor.  The hall effect sensor is physically similar to the technology used in the 95-96 cam and crank sensors.  Theoretically the hall effect sensor is higher resolution.  They all work. 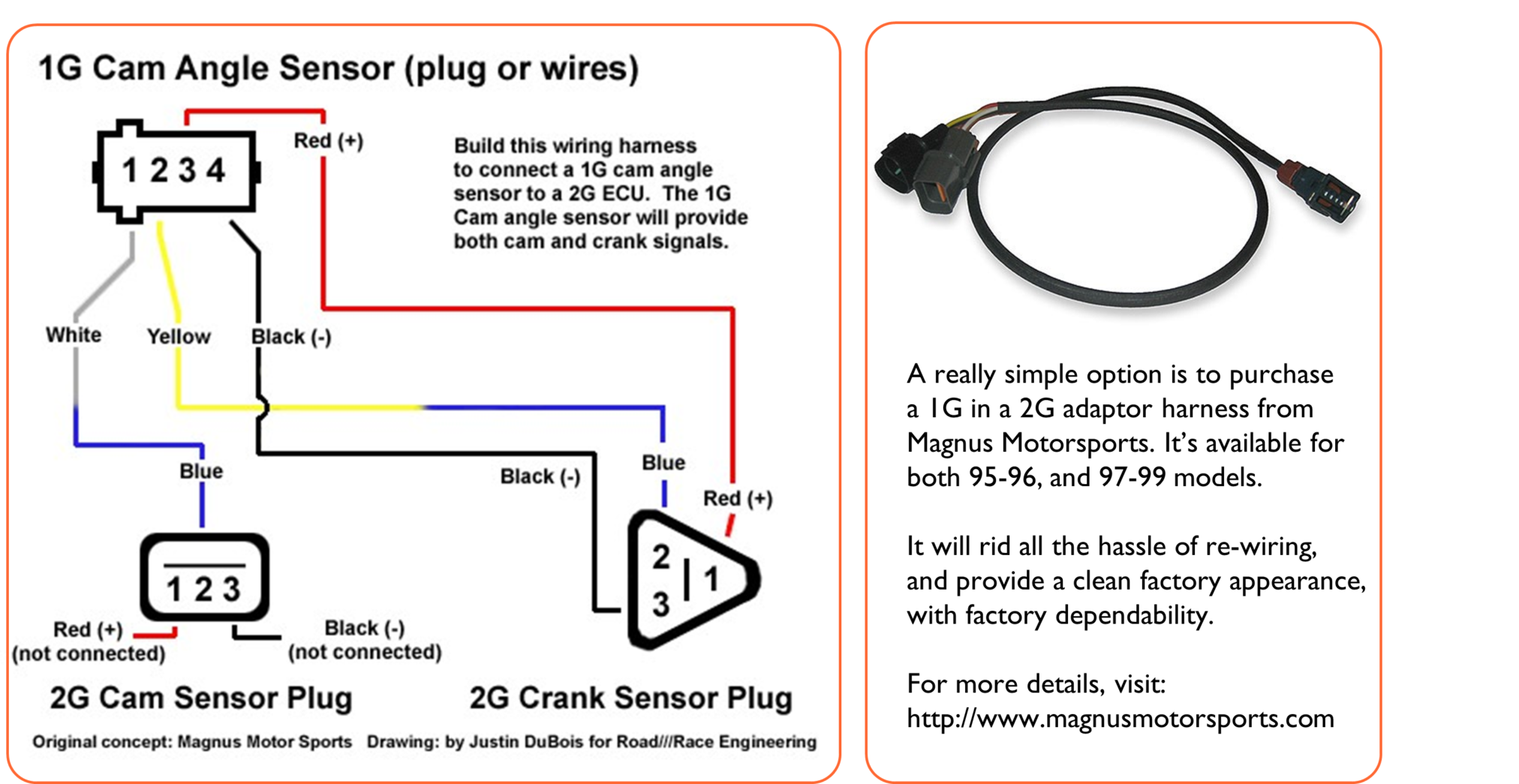 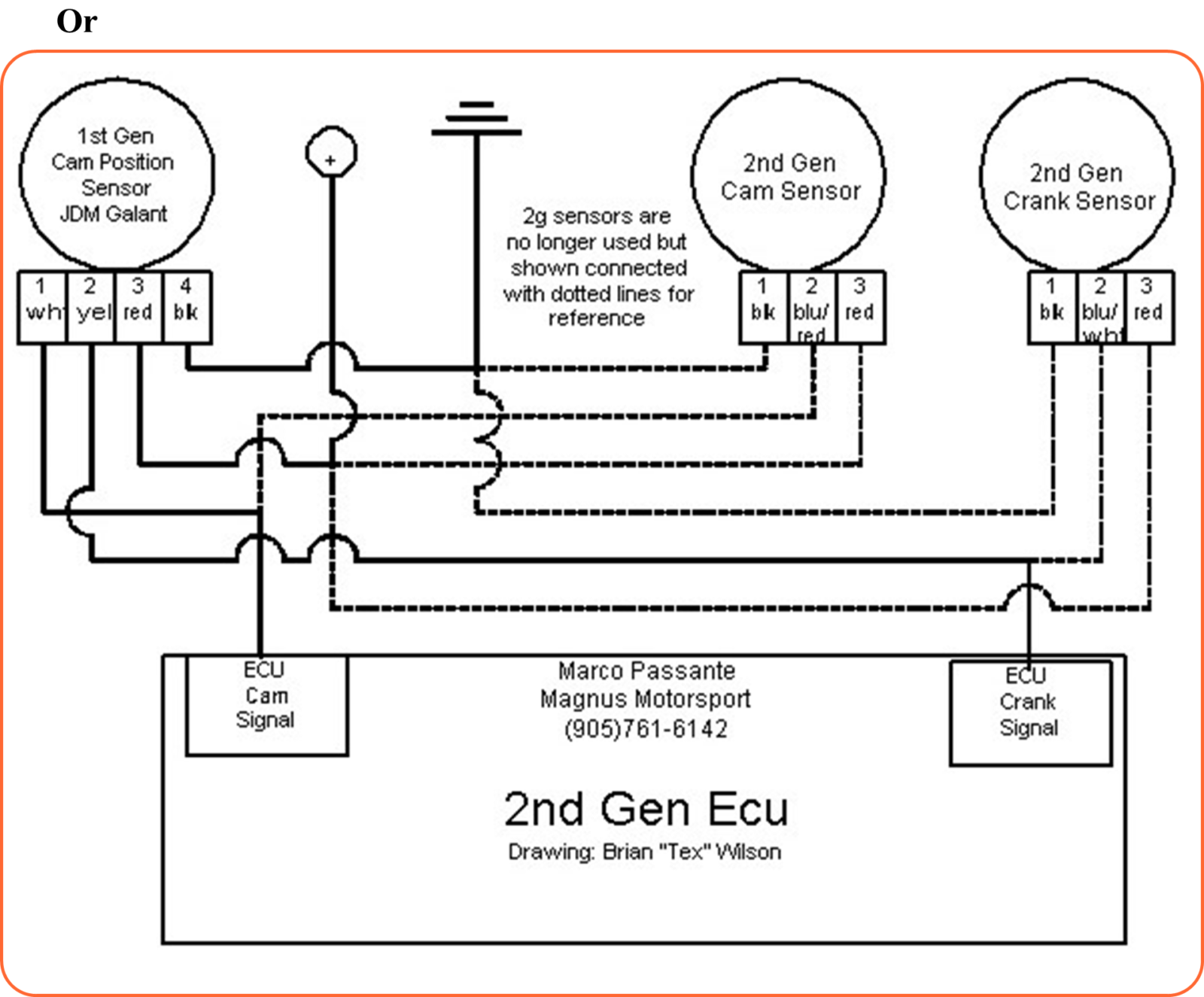 Due to the inverted Cam signal, injector trigger wires will need to be switch on 95-96 year ECU cars with this wiring diagram in order to bring the signals back into phase.  The difference is subtle, but the motor will start easier, provide smoother idle, and have less hesitations during mild acceleration.

Use the following diagram:

When removing the pins on your ECU wiring harness be patient and delicate.  It requires no force to remove the pins.  Consult the diagram in the front of your electrical service manual regarding the proper way to inspect and remove pins.  You will need a tiny jewelers screwdriver, (1/16 in) to release a plastic catch holding the pin’s in. Use a flashlight and take a good look at the harness before beginning.

The spark coil signal is inverted. Looking at the coils, label each wire A,B,C,D. Change the spark plug wire locations: A is now C, B is now D, C is now A and D is now B. Another way to do this is to change the trigger wires to the coil, (3 wire triangle plug, next to the igniter).  Switch the two blue wires.  One is blue with red stripe, the other is blue with black stripe. The third wire that remains unchanged is black with white stripe. 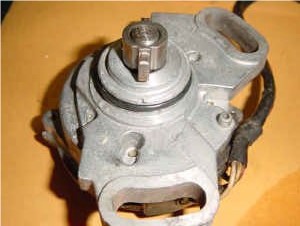 Lined up 180 degrees out 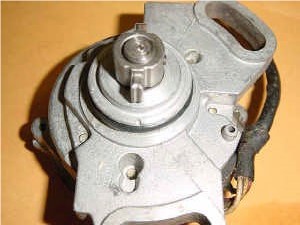 Lined up correct for TDC #1

Setting the base timing

Many people using the 1G CAS on a 2G head have been running into problems with misfire engine codes while at cruise. Many different things have been blamed for this and many different fixes have been attempted.

This fix will keep the ECU from looking for misfires at all. This is the criterion that must be met before the ECU will start to look for misfires:

Now if we can get one of these values outside of the criteria the ECU won’t check for misfires. The value that would be the easiest to change would be the barometric pressure sensor. We’re going to add resistance to this value so that the ECU will see less barometric pressure than what there really is. This will also lean the car out so you should see a performance increase as well. Depending on the car and altitude you might need to add more fuel with an AFC.

So let’s get started, Parts needed:

Step 1: Remove the access panel on the driver’s side of the center console. You should now see four plugs with a ton of wires going to them.

Step 2: Pull out the top plug, it’ll be the one that’s the hardest to reach. Locate wire #85. It’s orange with a white stripe.

Step 3: Cut the orange wire in half. Solder one end of the wire to the center peg of your potentiometer. Solder the other end to either the left or right leg, it doesn’t matter which. Turn your potentiometer all the way counter-clockwise.

Step 4: Plug the harness back in and start up the car. It should sound like it did before you did any modifications. If the idle is choppy or the car won’t run you turned your potentiometer the wrong way.

Step 5: Add resistance to the barometric pressure sensor by slowly turning the knob on the potentiometer. Drive the car around; if you get a CEL then add some more resistance. Keep doing this until you no longer get the CELs. 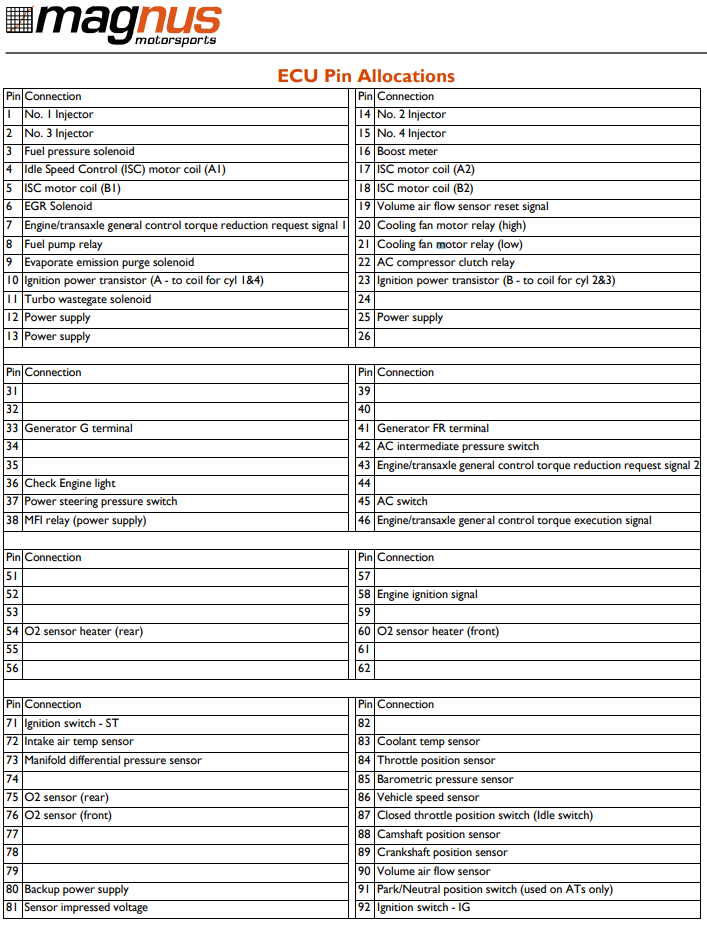